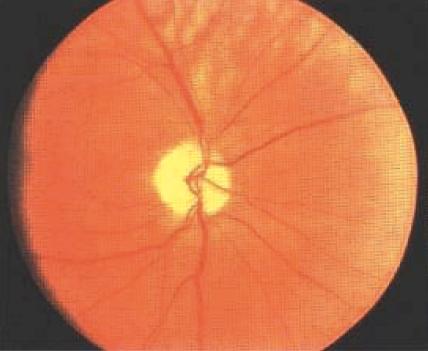 Tell the examiner that you would like to look for cerebellar signs (remember that multiple sclerosis is the commonest cause of optic atrophy).

This patient has primary optic atrophy (lesion) due to multiple sclerosis (aetiology). I would like to check the visual fields for central scotoma (functional status).

What is your diagnosis?

The differential diagnosis is as follows:

What is the difference between primary and secondary optic atrophy?

What is consecutive optic atrophy?

Consecutive optic atrophy is a controversial term and is best avoided. Some use it as an equivalent or alternative for what has been described above as secondary optic atrophy, but others use the term to indicate an atrophy complicating retinitis or, rarely, Tay-Sachs disease or retinitis pigmentosa.

What is glaucomatous optic atrophy?

How would you investigate a patient with optic neuropathy?

T. von Leber (1840-1917), Professor of Ophthalmology at the University of Heidelberg, Germany.