· History of ingestion of steroids, hypervitaminosis A (causes of benign

· There is swelling of the optic disc (look for haemorrhages and soft exudates; Fig.78). 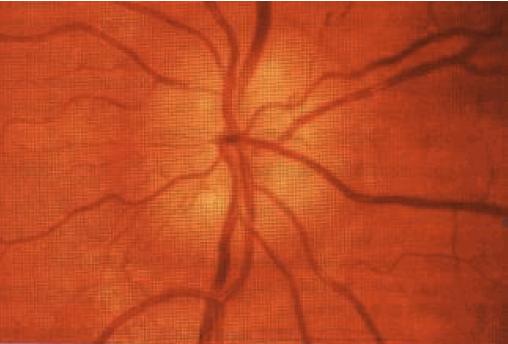 Note. Remember that the common causes are:

What do you understand by the term 'papilloedema'?

Papilloedema is the swelling of the nerve head as seen on ophthalmoscopy. The colour

of the disc becomes redder, approximating to that of the rest of the retina; its contour

becomes blurred and the cup and cribrosa are filled in.

What is the first manifestation of papilloedema ?

The earliest manifestation of papilloedema is the engorgement of the veins.

What is the nature of the field defect in papilloedema?

con-sequent diminution of visual fields and gradual loss of visual acuity, but a fair

degree of acuity may remain until papilloedema is marked.

Mention a few causes of papilloedema.

· Raised intracranial pressure resulting from one of the following conditions:

- Impaired circulation of the CSF due to aqueduct stenosis.

· Increased protein in the CSF due to one of the following:

· Medullated nerve fibres, seen on the disc or even on the retina. The appearance

is typically flared and on focusing will reveal fibres traversing the area. Field defects are

due to the retinal vessels being obscured. Since these are present from birth. the patient

is unaware of the defect.

· Bergmeister's papilla, in which there is a whitish elevation of the centre of the

disc with venous and arterial sheathing. It is common and seen at all ages. There is an

Note. Elevation or swelling of the optic disc occurs in the following conditions:

· Infiltration of the nerve head by malignant cells.

What do you know about Foster Kennedy syndrome?

Unilateral papilloedema, with or without 'secondary' optic atrophy on the other side,

frontal lobe or of the pituitary body.

What do you understand by the term 'papillitis'?

· Vascular disorders of the nerve head.

How do you differentiate papillitis from papilloedema?

in relation to the degree of swelling late stages

particularly for red and green of the blind spot

Note. A Marcus Gunn pupil is one that shows better constriction to an indirect response

than to direct light.

What are the stages of papilloedema ?

· Stage I - increase in venous calibre and tortuosity.

suddenly on the surface of the disc.

· Stage III - blurring of the discs on the nasal side. (Note. In many normal discs the nasal

blurring of the nasal disc margins.)

· Stage IV - the whole disc becomes suffused and slightly elevated. The margins may

disappear and the vessels seem to emerge from a mushy swelling. The optic cup is

filled and there are haemorrhages around the disc.

What are the features of benign intracranial hypertension? Dandy's diagnostic criteria

· Opening pressure of cerebrospinal fluid (CSF) during lumbar puncture is >20

cmH20 and CSF is of normal composition.

· Normal ventricles and normal study on CT or MRI.

What treatment options are available for pseudotumor cerebri? · Discontinuation of

Foster Kennedy 0884-1952) was born in Belfast. He was Professor of Neurology at

Cornell University. He described his syndrome in 1923.