Look at this patient's fundus.

· Visual loss is often detected when one eye is covered for testing visual acuity.

· Loss of ability to read, recognize faces or drive a car; however, patients have

· Metamorphosia (distortion of the shape of objects in view).

· Comment on the white walking aid by the bedside, which indicates the patient is 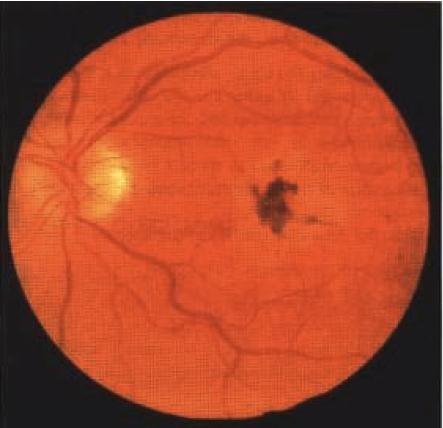 vision and maintenance of peripheral vision). Patients with only driJsen typically require

registrable blindness in the United Kingdom.

This patient has senile macular degeneration (aetiology) and is registered blind, as

macula. Nearly all individuals over the age of 50 years of age have at least one small

of amorphous material accumulated between Bruch's membrane and the pig-ment

epithelium. Although the exact origin is not known, it is believed that driJsen occur due

retinal pigment epithelium that are compromised by age and other fac-tots. Only eyes

What are the types of senile macular degeneration?

There are two types:

and the rods and cones. There is no leakage of blood or serum.

2. Neovascular exudative or 'wet' type: there is haemorrhagic or serous

detachment of the retinal pigment epithelium and choroidal neovascularization resulting

in leakage and fibrovascular scarring.

What do you know about neovascularization in these patients?

proliferate across Bruch's membrane under the retinal pigment epithelium and, in certain

cases, continue their extension into the subretinal space. Substantial leakage from

these neovascular membranes can result in retinal detachment. The most devastating

consequence is haemorrhage, which resolves forming a disciform scar.

with disorder in one eye?

What investigations are performed to detect choroidal neovascularization ?

How is the neovascularization treated?

· Laser photocoagulation of regions outside the foveal avascular zone.

· Subfoveal neovascularization: when photocoagulated is associated with a

treatment-induced visual loss immediately but in the long term is found to be beneficial.

large scotoma occurs as a result of treatment.

· Photodynamic therapy with photosensitizers such as verteporfin is currently

* Interferon-or is currently being evaluated.

· Zinc: the use of zinc as a therapeutic agent for macular degeneration has not

been evaluated in a rigorous trial.

What is the difference between krypton and argon laser

neovascularization is closer than 200 pm but not under the fovea, because of its ability

argon laser). The conventional argon laser has blue and green wavelengths. The green

wave-length is absorbed by haemoglobin and thus may damage the retina, whilst the

blue wavelength is absorbed by the macular xanthophyll and results in foveal damage.

Mention some drugs that can cause maculopathy.