Look at this patient's legs.

Examine this patient's back.

History of diabetes (according to a recent study from Ireland only a minority of the patients have diabetes; Br J Dermatol 1999; 40: 283-6).

Tell the examiner that you would like to check the urine for sugar. This patient has plaques with yellow waxy centres on the shins (lesions) due to diabetes mellitus (aetiology) which are cosmetically disfiguring (functional status).N Engl J Med 1993; 329: 320; 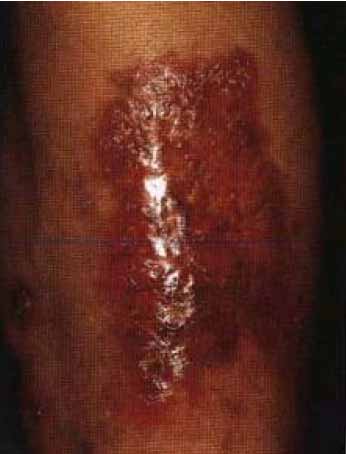 a classical photograph of the lesion; candidates are encouraged to refer to this photograph.

What is the histology of these lesions?

What may complicate the condition?

Ulceration of the plaque.

What treatment is available for such lesions?

What other skin lesions are usually seen on the shins?

What are the other skin lesions seen in diabetes?